While China is enjoying its annul festivities, South Africa has become a center of attention for the ferrochrome and metals industry. The interest is primarily due to the country’s political change, the election of the new president and rapid strengthening of the Rand.

Over the last couple of months, South African Rand (ZAR) has appreciated by around 12% to US Dollar (as shown in the graph below). This jump made Rand one of the fastest growing currencies among all emerging countries.

The strengthening of ZAR does have an unprecedent impact on the South African ferrochrome industry: 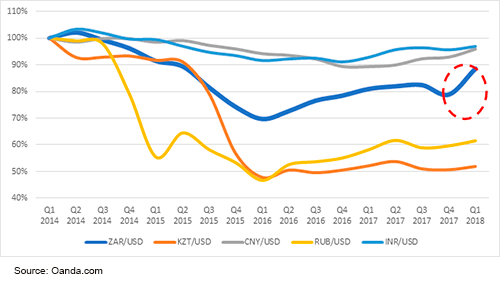 One of the main reasons for strengthening of the Rand was election of Cyril Ramaphosa as the new president of South Africa. His view on economy, specifically the mining sector showed that finally the government will address the issues plaguing the industry over the last decades. Furthermore, there is a strong believe that he will scrap completely the new Mining Chapter, thus attracting more investors in the country.

In conclusion we see both events as an important step in the history of the South African ferrochrome industry and expect it finally to get out of the recession.