A Few thoughts on the second half of 2018

With the first half of 2018 almost over, we would like to point out couple of observations which we believe are important for the market in the nearest future.

China Tender prices recently have been decreasing over the last three months. Although the current drop is much steadier than last year, now it seems that the market has found a footing floor, below which the supply might not be sustainable.

As the graph below shows that over the last two years, when the price drops below 7,000 RMB/t, the availability of the FeCr in China decreases.

Thus, a 7000 RMB level is rather a technical floor for tender prices in China in present circumstances. As the result, we expect the prices to start picking up again in the second half, though with a more calculated and moderate pace. 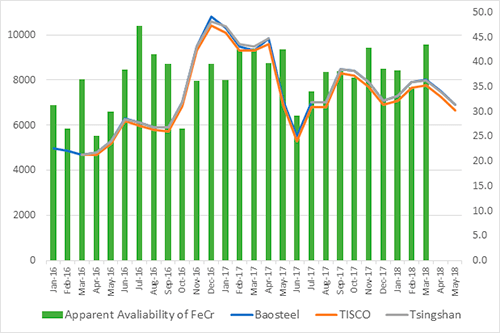 Another interesting development which has happened during the last couple of years but might not have been fully recognized by the market, is continuous consolidation of the ferrochrome industry in South Africa. The diagrams below illustrate that by 2018 only a few producers remain.

The main reasons behind the closures or production suspensions in RSA are as follows:

With potential acquisition of Hernic by Samancor, South African ferrochrome industry will be controlled by two major players: Glencore and Samancor. However, it is unlikely that Samancor will take over Quarterly Benchmark negations. 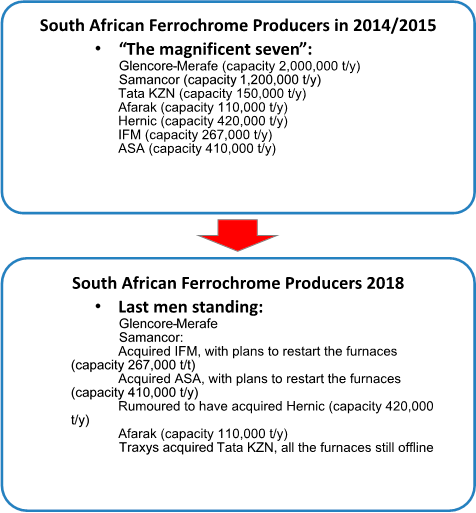 Previous
Today’s Market: is there a way forward to less volatility?
Next
Q3 2018 more of the same or change in trend?
Page load link