For the second consecutive month, stainless steel producers in China increased their ferrochrome tender prices by 600 RMB/mt, apparently the fundamentals support our expectations. Although this is an increase of 8%, we expect more growth towards the end of the quarter.

On top of the reasons discussed in the previous posts there is additional strong reason for further increase. This is a strong growth of South African Rand against USD, which has accelerated recently. 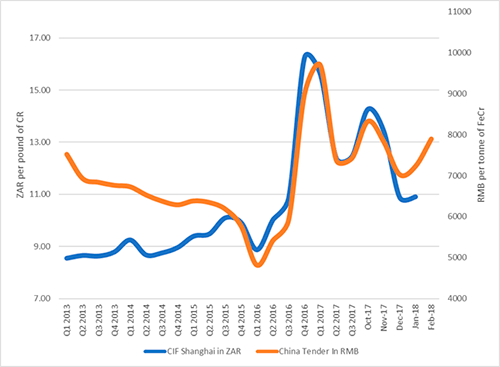 As the above graphs shows that weakening of South African Rand over 2016-2017 helped chromium and ferrochrome producers to keep their revenue in Rands through the period of low prices (USc/lb). Over the last quarter, Rand strengthened by around 10% relative to dollar, thus forcing producers to increase the price for both chromium ore and ferrochrome.

Now prices of domestic ferrochrome in China are up 8% in RMB/mt. This will translate into a more or less same increase of usc/lb CIF China import price for South Africa’s Charge chrome. Yet, producers from RSA will get no increase in Rands per mt to cover their rising costs.