Eastern Express. FeCr market in China vs Rest of the World?

Home » Eastern Express. FeCr market in China vs Rest of the World?

During 2021 global FeCr prices rose to the record levels (last seen in 2008), led in H1 2021 by China and followed quickly by the market in the RoW. By the end of H2 a risk of market correction became visible. In China FeCr prices, indeed corrected.

After Ferrochrome Bidding Prices in China reached their peak in August and November of 2021, they gradually decreased, with the February 2022 prices being:

While the prices dropped almost 16% compared to December level, from the graph below one can see that they remain at relatively high level compared to the last 5 years. 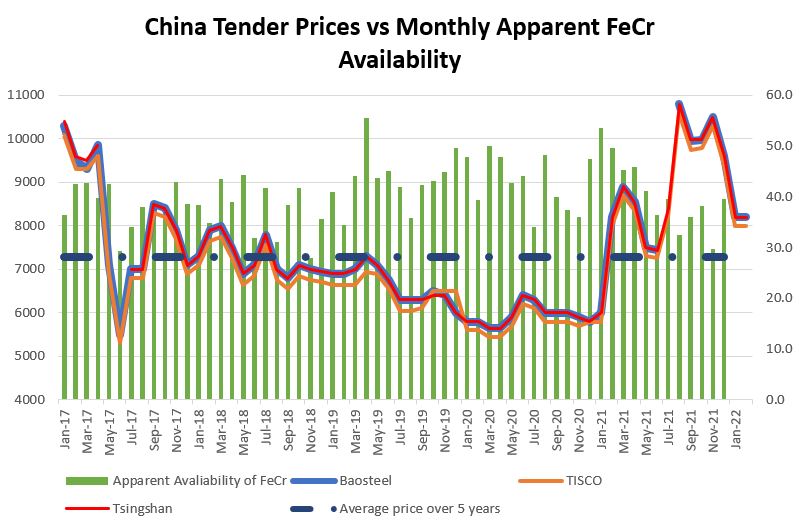 If we compare the annual average price for 2022 (January and February announcements), with average prices from 2017-2021, it shows that current price level is above all years except 2021, when rapid price increased pushed them to new heights. Even when using average price over the last 5 years, so far 2022 average price is 11% higher.

Despite steel production decrease in China over the last few months, to improve air quality for the Olympic Games and to combat air pollution. China has slightly moved the timeline for peak carbon emission, from 2025 to 2030 (probable for both carbon and stainless industries). That might keep momentum from the second half of 2021, such as record stainless production and consumption to continue in 2022.

There is also a strong possibility of easing monetary policy in China to further stimulate the economy, which is a complete opposite of the policies implemented by FED, ECB and other federal banks ex-China.

There are some additional factors that could further impact FeCr market:

As FeCr prices in Europe are 30-35% higher than in China, for the market to normalize, either FeCr prices in China should return to the level of September-December, or prices in the rest of the world to decrease substantially.

Recently steel and metals prices in China have started to advance again following stimulative actions by Chinese financial authorities. Thus, FeCr market in China is likely to continue this momentum, which makes chance of correction in FeCr prices ex-China in H1 2022 limited.

With the approaching winter in South Africa and likelihood of new electricity tariffs increases, FeCr market ex-China is likely to stabilize in the near-term close to the current level.

Previous
No time to buy? Or not the time to buy? FeCr market in 2021 and looking forward to 2022
Next
InTheRightVein
Page load link