Despite a big drop, it falls in line with the current decrease in CIF Shanghai, one of the main indicators of the price movement.
From the graph below, one can see that historically CIF Shanghai represents 72% of value of the Benchmark price. New benchmark of 1.04 USD/lb, corresponds to 0.75USD/lb for CIF Shanghai, the exact level market is reporting.
The current level can be considered a pricing bottom, with the production costs being either at the level of below current prices. 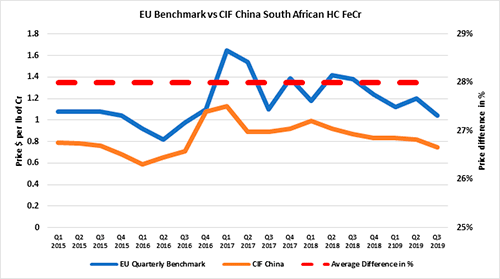 As discussed before, South African ferrochrome industry underwent a significant transformation. That is still ongoing, with a change of ownership in Samancor.

That creates a possibility of Samancor’s charge chrome production being supplied mainly to China, thus leaving Glencore/Merafe as the only charge chrome producer in South Africa (Afarak is currently in turmoil, and it remains to be seen if it recovers).

This development in the long term might generate a shortage of charge chrome in the ex-China markets, which in turn might support European Benchmark levels and improve high carbon ferrochrome prices.