The graph below shows that some countries have experienced severe depreciation of national currencies since the beginning of 2019.

The Brazilian Real has been the worst performing currency among developing economies falling about 32%. Over the last 4 years Brazil maintained a 3% share in refined FeCr trade, totaling 11,000 tonnes, with barely any presence in HC FeCr and Cr ore seaborne markets.

The South African Rand was the second worst performing currency dropping 23%, while South Africa is one of the largest suppliers of both FeCr and chromium ore: 3,416,881 tonnes and 13,664,352 tonnes respectively, exported in 2019.

The third most depreciated currency is the Turkish Lira also showing 24% drop. Turkey is the second biggest supplier of high-grade high carbon ferrochrome and chromium ore and also has some refined Ferro chromium production, while its share in total seaborne market, including lower grades, is not big. Exports in 2019: HC FeCr 73,634 tonnes, LC FeCr 21,550 tonnes and Cr ore 1,030,692 tonnes.

It is interesting to compare price levels in USD today and in the beginning of 2019 and calculate at which hypothetical price in USD today local producers would receive the same return in their local currencies as they were getting more than a year ago. 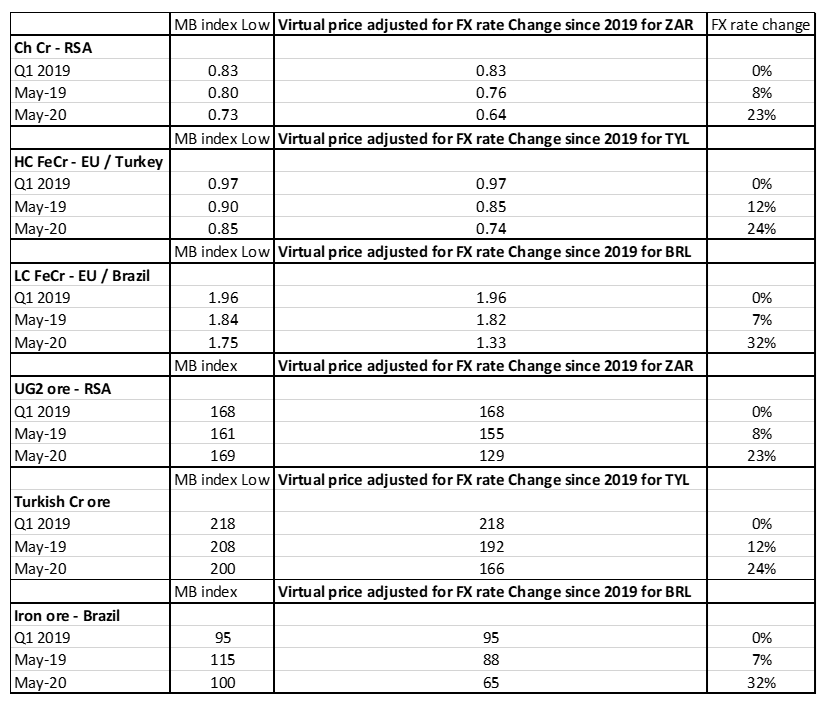 The above exercise shows that despite a drop in international USD denominated prices since Q1 2019 these prices have significantly increased in the corresponding local currencies i.e. after adjustment for FX rate change.

Over the last week Chinese Renminbi fluctuated to the levels not seen since 2008, settling at 7.1965. Later in the week The People’s Bank of China acted to support the exchange rate and returned it to 7.1316.

Still, from the graph one can see that since the beginning of 2019 CNY lost only 5% and remained mostly stable, compared to other currencies, China RMB exchange further movement might be at risk of additional decrease.

The Indian Rupee was the second most stable currency and like the CNY, it lost only 5% since the beginning of 2019. Moody’s recently downgraded India’s rating for the first time in 22 years on the background of industry lockdowns and potential economic slowdown. It remains to be seen if this will have an impact on the national currency exchange rate.

Despite recent price improvement in the ferrochrome market and strengthening of currencies in the major FeCr and other raw material producing countries, these countries’ exchange rates remain one of the major risks for those markets.

Previous
Catch up if you can
Next
"Quizas, Quizas, Quizas": Cr market expectations for Q3 and its long overdue recovery hopes
Page load link