How much is the fish or how to compare different, yet similar? Way forward to make exchange trade of complex alloys

Home » How much is the fish or how to compare different, yet similar? Way forward to make exchange trade of complex alloys

Ferroalloys market continues its rollercoaster: market started to gain steam since Q1 2021, which extended through Q2/Q3, while prices for some of alloys such as ferrochrome reached levels not seen since 2008 by now, after a subpar and highly depressed 2019-2020. Despite such strong movement, the market issues remain in place, with prices of similar FeCr material having a very substantial difference level based on chemical composition, grades, geographical location, and some indexes reacting to price changes with a delay.
One such example is the difference between European Quarterly Benchmark (now at $1.80 per lb/Cr, up by 54% YTD) and China import Charge chrome 50% Cr index, CIF Shanghai, duty unpaid, $ per Ib/Cr (now at $1.32 per lb/Cr, up by 81% YTD). 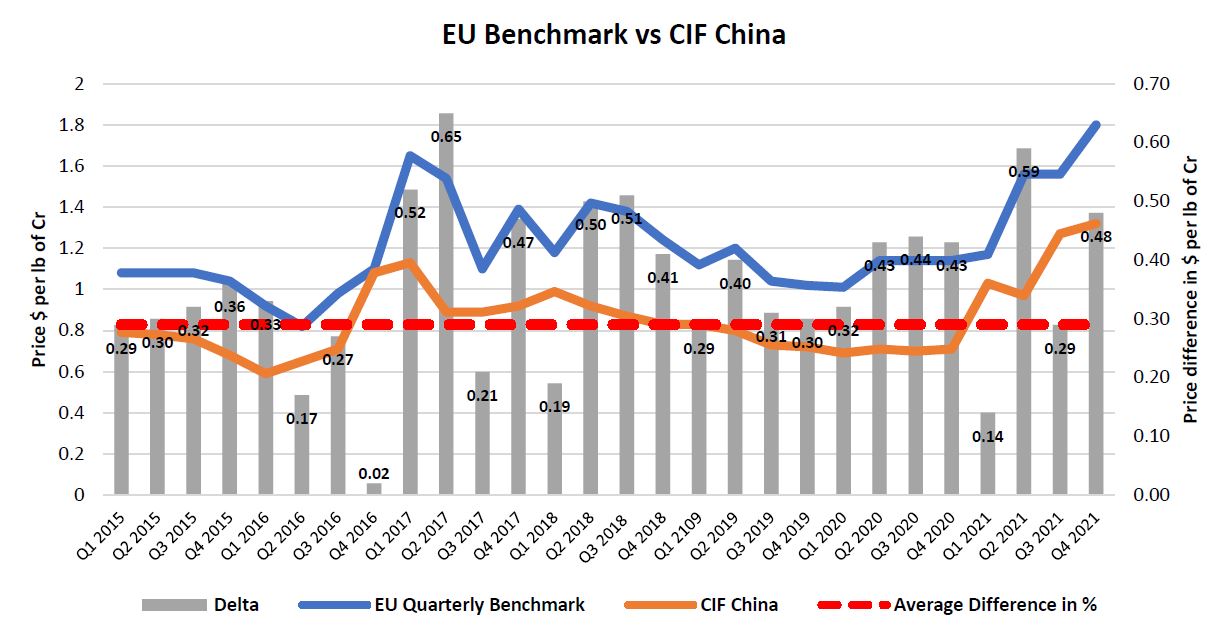 It is the same or similar material, but the numbers represent the price indexes used by the market in two different regions. Though historically logistics costs were relatively low, even with the current rates increase, these remain a fraction of the price gap. This price difference could leave somebody with impression that there is a price arbitrage opportunity, however opportunity does not exist, since the actual difference is in the price indexes, rather than actual sales price.
This example, among others, indicates that pricing system for FeCr is very outdated and requires serious modernization.

Below are the most common pricing indicators for FeCr:
Bidding Price – applied for HC, LC and Ch Cr in China
Announced monthly by the major stainless-steel producers in China. While the price is announced, other very significant details such as number of competitors, individual discounts, or incentives, as well as total tonnage in some cases remains undisclosed. Thus, transparency is limited.

Survey Pricing – applied for HC/LC FeCr
Provided by publishing agencies, which are recognized throughout the market. Based on weekly gathered information from market participants, while total amount of assessed deals is much lower than total market, due to fact that more than 90% of the deals are conducted by formulas. Often used as a basis for contractual formulas.

Spot deals concluded offline/online
Confidential price agreed between seller and buyer at the time of their inquire, offline or via online negotiations. This approach lacks information about total tonnage, number of competitors, guaranteed feedback, and results of negotiations in some cases, together with absences of liquidity and transparency. Thus, this could hardly be considered relevant market indicator. Sometimes used for survey pricing.

Idea to follow FeCr Bidding Prices in China to value FeCr globally is not a solution as well. While Bidding Prices in China became important index, using it for contractual formulas outside China will create more difficulties for both suppliers and consumers, as was evident few years ago. By now, increased electricity shortage, environmental challenges for domestic production and volatile domestic prices in China, makes it even less possible.

New ways to establish market price, while fixing issues with the current pricing mechanisms such as being illiquid and lack of most relevant information in order to judge its reliability, have been developed in a meanwhile.

However, creation of traditional exchange for ferroalloys have also been difficult:
• Lack of standardization and multichemical quality parameters for each product, could have its own value in use which depends on individual producer from one side and consumer from the other side
• Due to the above reasons, any standardization leads to decrease of liquidity and lack of publicly agreed product value
• Consequently, classic exchange mechanisms were not successfully applied to auction trading of ferroalloys products

UNCIHROME AG has developed a concept and platform for ferroalloys trading, based on significant modification of traditional exchange algorithms, taking into account multiple quality paraments such as chemical, size and geographical, and accounts for both private and public values.

This platform combines advantage of impossibility to change the records, similar to blockchain (without using blockchain), and end-to-end encryption, insuring confidentially of trader’s interest and invariability of the results. Thus, providing buyers and sellers with secure, confidential, and liquid marketplace to conduct business in secured and tamperproof environment.

This concept is implemented in platform called SoftMetal, to learn more about it and its benefits, please follow the link below:
• SoftMetal home page

Previous
UNICHROME presentation at the 6th CIS Ferroalloys Conference in Tbilisi, Georgia
Next
No time to buy? Or not the time to buy? FeCr market in 2021 and looking forward to 2022
Page load link