With the summer end, slowdown is starting to ease up. Despite positive market news such as nickel price surge (around 32% since the beginning of July), the overall sentiment of the market is cautious and calculated due to still ongoing risks such as low demand, slowing EU economy, ongoing trade wars.
Last month, major stainless-steel mills in China (Baosteel, TISCO and Tsingshan) have released their tender prices for July. The corresponding drops were: 450 RMB/t, 500 RMB/t, 450 RMB/t respectively, making average July tender price 6215 RMB/t (roughly equaling 0.73 USD/lb).

This drop was more than originally anticipated, but with the oversupply of ferrochrome, large stocks and seasonal business slowdown, the steel mills were able to drive the prices down.

For August the stainless-steel mills rolled the Tender price over, that announcement arrived on the hills of production results for stainless steel in China in H1 2019. According to the Chinese Stainless-Steel Council the output increased by 8.5% in H1 to 14.35 million tonnes. This shows that demand for ferrochrome is still there, but price recovery might take a long time due to increased ferrochrome availability (which is at the highest level since 2017). 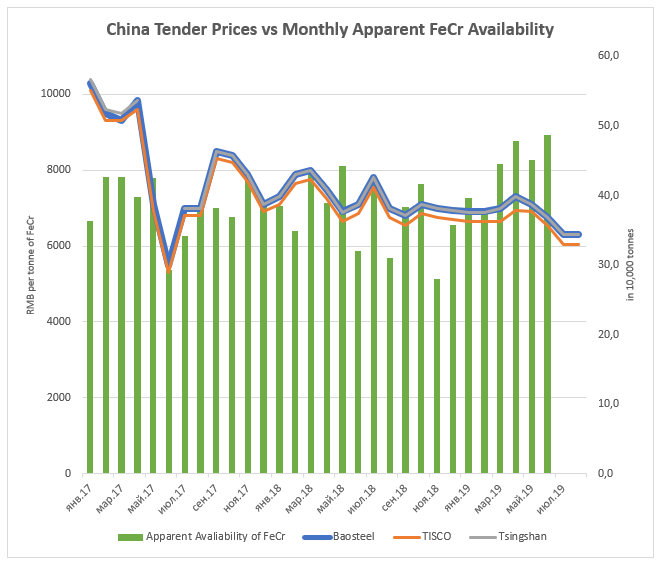 As one can see from the graph below, current prices are reaching a level that is close to break-even point for ferrochrome producers and the gap between European spot prices and Chinese domestic prices is at its lowest levels since Q1 2013. With Chinese domestic prices stabilizing, European prices should start a recovery, because soon some of the producers might begin diverting more tonnages to China. 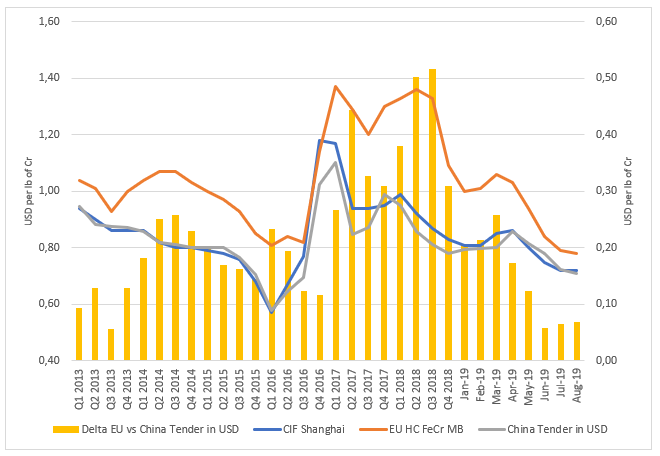 Despite the price rollover for China Tender from July to August, the Tender Price in USD decreased due to Yuan devaluation. Lately the Chinese yuan has softened compared to USD as a response to new import duties for Chinese products in the United States.

Since the last change in Tender Price (July tender), yuan dropped 5% relative to USD, while chrome ore price increased by 10% in dollar terms. This should provide pricing boost for the upcoming September Tender, since cost of raw materials has increased in RMB. That means that even 5% increase in Tender Price in RMB would not be enough to compensate the producers for raw material price increase. At the same time, demand ex-China is still slow.

The yuan adds a new dimension to the currency risk, now combined with increased volatility of the South African rand, Turkish lira and Russian ruble.

September will show if recent rally in Nickel prices will boost stainless steel and FeCr demand towards Q4.