Up From the Bottom

Home » Up From the Bottom

Just like in October, TISCO was the first mill to release the price, possibly to seize the market and hedge itself from sudden price surges. TISCO rolled the price over at 6,650 RMB/t On the other hand, this time Baosteel and Tsingshan increased their bidding price by 100 RMB to 7,000 RMB/t and 6,996 RMB/t respectively.

As the matter of fact, in case of TISCO there are some differences in fundamentals of ferrochrome bidding price: 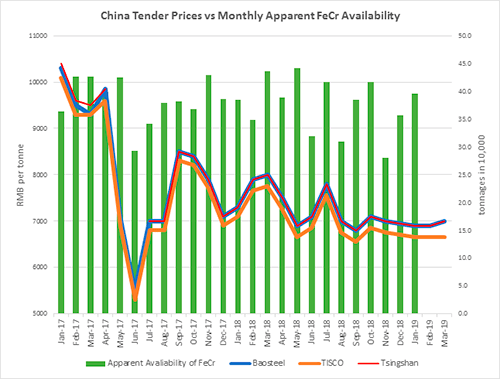 Even though 100 RMB/t is a slight increase, it is positive news for the market as it moved the prices close to 7,000 RMB/t.

It is probably the case that article, 7,000 RMB/t should be considered as a Chinese domestic ferrochrome industry support level. Both Baosteel and Tsingshan have returned to that level after 3 months. Some of the reasons for increase in bidding prices in China are as follows:

Over the past years some of the ferrochrome market participants suggested that international ferrochrome prices should be based on the Chinese domestic market data like bidding price and CIF Shanghai, which are more or less following bidding price in USD terms. Although market in China became an important part of the global ferrochrome industry, it still has too many specific local matters, like export duty regulations, ecological regulations and RMB exchange rate exposure. To apply the abovementioned indexes directly to contractual formulas ex China, will significantly strengthen its natural influence onto global markets outside of China and will be misleading and risky from both consumers and producers sides.

Recently some news surfaced that Inner Mongolia is going to have power shortage, which will affect production in March and April. Some industry players believe that it won’t be a big issue, since environmental shutdowns didn’t have a major affect on the production in China. On the opposite side, some market participants believe that this might lead to a shortage of ferrochrome, at least in a short-term prospect.

The situation in Inner Mongolia shows some resemblance to the issues of Eskom in South Africa. The ferrochrome industry was set up in RSA because of raw material availability and cheap electricity. The similar principle was applied in establishing ferrochrome producing hub in Inner Mongolia, i.e. cheap electricity. The recent development illustrates that this principle might not be sustainable in a long-term outlook.

In the second half of 2018, prices in the rest of world balanced to parity with Chinese domestic prices (without delivery and duty expenses). Thus, the current price increase in China will provide support for price improvements globally.

Previous
Ferroalloys and ferrochrome market: transforming today from past to future
Next
FeCr Market: from Regional Trends to a Global Picture
Page load link